Interview with Sex Trafficking Survivor, Jennelle Gordon. She is the founder of Beyond Freedom.

Jennelle Gordon is an inspiration for women as a leader, speaker, and educator. She studied tantra and yoga extensively with masters in Thailand after leaving her traumatic past behind for a brighter future. Having been the product of rape and then the system, her fate would have been sealed by statistics to either death or a life of addiction. But rather than sit in the passenger seat of her own life and live in compliance with societal programming, she took the wheel and created her own destiny.

Born from violence to a troubled single mother in Pittsburgh, she quickly became a ward of the state and placed in a foster home of religious extremists. Her new family brought her on a missionary trip to Thailand where she was kept from receiving a proper education or medical treatment for her most critical formative years. They continued neglecting her health long after their return to America, and as she grew they would also keep her in isolation and secluded from the outside world in an effort to control her body and mind. However, her strength of self overcame their attempts at brainwashing and she left home on her eighteenth birthday. Unsure of her options without a formal education or any work experience, she enrolled in the army in hopes of building a better life for herself. Unfortunately, they didn’t do their due diligence and sent her to training without a medical examination. Had they done so, they would have discovered she was medically unfit due to years of neglect and she wouldn’t have suffered so needlessly by the physical stress of boot camp. As a result of their error, she was hospitalized whereby she accumulated medical debt she couldn’t pay and would become increasingly desperate for stability and security. This newfound vulnerability attracted predators who would sexually exploit her over the course of a decade through coercion and manipulation. She fell into the same cycle of victimization from her childhood and finally broke free when she faked her death in order to escape certain death. It was then that she would return to Thailand and study tantra; fully liberating her body, mind, and spirit.

Through her spiritual studies and yogic practices, she healed herself holistically from unresolved trauma and developed Dance Om; an integrative form of dance therapy designed to relinquish women from societal constraints on their sexuality and sense of self. Soon after completion of her spiritual training, she became pregnant with her son and returned to America. After giving birth to Amadi, she moved to California to teach yoga, but still couldn’t make ends meet. Living with her infant in a friend’s garage for some time, she decided on being a better provider and signed up for classes at Orange Coast College. There she was given an assignment to write a speech on any topic of her choosing, little did she know the research she would conduct for this assignment would completely change her life and the lives of countless other women. The topic she chose was human trafficking and upon reading the definition given by the United Nations, she realized that she was being trafficked for years unknowingly in plain sight.

One horrific realization led to a movement that started as a school club and grew into a nonprofit organization known as Beyond Freedom. It was only after she went to several organizations that were supposedly dedicated to helping survivors that she realized none of them provided what she felt survivors truly need. Her mission from then on became helping survivors heal from their trauma holistically and psychologically, as well as rebuild their lives by offering sanctuary, education, and career paths. She saw a pattern of victimization in survivors that stemmed from a slave mentality forced on them by their traffickers, and how they kept falling into the same cycle after breaking free. Her organization is the only survivor run operation dedicated to helping women liberate themselves spiritually and mentally so that they may sustain their freedom.

Her online momentum through social media caught the attention of world-renowned practical psychologist and motivational speaker, Tony Robbins. She was then flown to a retreat where they met and discussed how he could help her organization. This surge of support coupled with her overall experience at the retreat, inspired her creation of a holistic system of spiritual and sensual empowerment whereby she merges all her passions and teachings into one powerful modality known as the “O” Factors.

Jennelle’s quest for freedom has paved a path towards enlightenment that others can follow. She is a voice for the vulnerable and exploited and is unashamed of her identity. Her fearless commitment and determination in empowering women and educating the public about the truth of human trafficking in America today have been met with criticism and praise due to her boldness. While others who’ve experienced that same trauma would use it as an excuse for their failures, she transformed that thinking into fuel for success. Now, her life is dedicated to teaching people how they can tend the flame of divinity that shines within all of us.

To learn more about her organization, ways that you can get involved, and about her yet to be released book,  go to Beyond Freedom. 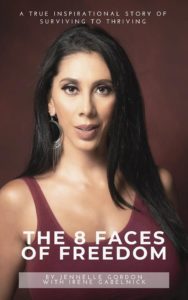 Beyond Freedom’s “Seven F’s to Thriving”:

Faith: With this survivors are encouraged to choose their faith. Through faith, survivors work through having their faith in humanity restored.

Fitness: Bodybuilding and weight lifting is a modality mechanism to help the survivors heal, including yoga dance movement therapy. The various forms of fitness are a huge aspect of healing for survivors.

Family: A lot of survivors do not have family or they do, but they’ve been estranged from them. Survivors are shown how to create a new family within their community. Whether that is through Church, Fitness Centers, or within other community groups.

Finances: When survivors come out of being trafficked, a lot of them may not even know how to open a bank account. Along with the help of many CPAs, survivors get help with taxes and even setting up life insurance policies to plan for their future.

Femininity: Healthy empowered connected sensuality is imperative to re-programming survivors from the impact that sex trafficking had on their bodies. These survivors have survived unspeakable crimes and that trauma has to be addressed. There are a lot of organizations that do not address the sexuality part and yet it’s a big part of their healing.

Freedom: Survivors are given back their power through higher education for going into a trade or from starting their own business. The survivors are paired with donors and individuals that work closely with Beyond Freedom to give them jobs, training, or internships. Providing them with opportunities for careers they can work from the comfort of their own home.

Fun: Healing through fun activities while cultivating a community of support.