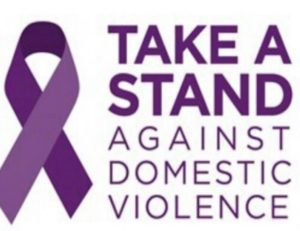 October is Domestic Violence Awareness Month. Unfortunately Domestic Violence (DV) awareness often gets overlooked by other awareness initiatives that also take place this month. With me being a survivor, I wanted to spread awareness and shed some light on this sensitive yet crucial issue.

What most don’t understand about DV is that the only weapon victims and survivors have as a means of defense in DV situations is their voice. Yet their voice is often the one thing being silenced. There are millions of victims of violence and some are given a platform to have their voice heard, while others have to fight every day and even for years to be heard.

Those who are given a platform to share their story of trauma should never take that platform they have been given for granted because its an outlet, a tool other victims will never get the chance to have; yet desperately are in need of in order to overcome and survive their violence and trauma. For some victims of violence having their voice heard is a matter of life or death for them!

So below are five ways you can spread domestic violence awareness, not just this month but through out the year.

1.) Share their Story via Social Media: Empower victims/survivors by giving a voice to their story and giving them a platform to have their voices heard! If we aren’t willing to talk about violence, we won’t be able to stop it! Social Media is the biggest outlet to get the news out there, stories shared, and to expose injustice.

We all have social media accounts, by sharing a link of a victim/survivors story you are promoting peace and standing up to violence. You are helping a victim/ survivor have a voice and for those in hiding, like myself its one step closer to being able to come out of hiding. Also sharing via social media takes a way power form the offender/perpetrator by bringing darkness to light – which has the power to stop that offender/perpetaror from victimizing again. Join with me in taking a stand against violence and spread awareness by sharing the inspiring stories of victims/survivors and helping them to have their voices heard!

2.) Community Support & Acceptance: This even extends to churches. I am a Christian but I was told that because of the trauma I suffered, that God could not use me to bring glory and honor to His Kingdom and that there was not a place for me within the church because of the violence I experienced at the hands of others. None of that is even biblical! God can and will redeem every situation and use your story to make a difference making beauty from ashes.

The support of the community will not only help the victims/survivors to feel heard but will help to aid in their healing and their ability to overcome what they have endured. Also with the support of the community, that will  speak volumes to the offenders/perpetrators that their actions are not acceptable and that the community does not condone violence nor will they stand by and allow it to continue. When people do not take a side, their silence is siding with the offenders/perpetrators allowing them to continue to victims others.

3.) Listen Before You Give Your Opinion: People are usually quick to give their opinion regarding a situation they have neither walked nor that they really understand or can comprehend. Even though it may seem like an unfathomable event, that does not mean it didn’t happen. Also if the traumatic event is too intense for you to wrap your mind around, can you even imagine what the victim/survivor may be going through?!? Try to place yourself in their shoes and to try to understand what life after trauma might be like for them.

Please listen to them and hear them out, listening is huge for victims/survivors, they want to and need to be heard. Also when you respond, be sensitive. Your comments and opinions can cause further damage. Please do not minimize what they have been through. Minimization is a psychology term and a form of victimization. To tell them that they should be grateful that their situation is not worse is minimizing their trauma because in their world their situation couldn’t get any worse. They are already walking through hell and struggling every day to overcome their situation. Please think before you speak.

4.) Don’t Treat Victims/Survivors Differently: Often times victims/survivors are rejected, mistreated, and ostracized for things that had happened to them that were completely out of their control. They are often looked down on and seen as lesser or weaker and isolated by others. Please remember that you are judging a situation that you probably haven’t walked.

Show compassion instead of criticism, acceptance rather than rejection, listen before you judge, and give them a chance rather than immediately discounting them. What they have gone through does not define them, their worth, or even speak to their character…but how you treat victims and survivors does speak to your character! Would you want to be punished for something you experienced? Of course you wouldn’t so why would you further punish them, the victim/survivor for something they didn’t do but was done to them, comepletely out of their control?!? Remember violence does not discriminate, anyone can become a victim, and each one of you knows a victim/survivor whether you realize it or not. Most acts of violence go unreported and not all victims/survivors report because of fear of how they will be shamed, blamed, guilt tripped, and not believed. Also its rare that victims/survivors of domestic or sexual violence ever receive justice.

5.) Believe The Victim/Survivor: More times than not the victim/survivor is not believed (despite the evidence proving the act of violence) and they end up being blamed and shamed for violence they didn’t commit but were harmed by. To have someone believe them especially when their cruel abuser/rapist/offender/perpetrator is denying that anything even happened and calling them liars, would make a huge differenence in their healing and within the judicial process.

If more victims/survivors were believed the offenders/perpetrators would be legally and criminally held accountable and less likely to further victimize others. You may think you are immune to violence, but violence is happening all around us. You could be next, but holding the offender/perpetrator responsible is a preventative measure in thwarting violence. Let’s stand together and unit against violence.