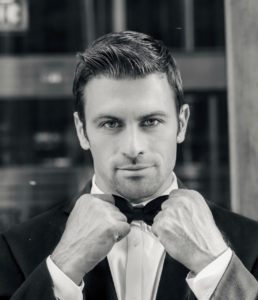 Michael’s resume is both multifaceted as well as impressive. He is a world traveler, photographer, speaker, fitness & fashion model, and has worked as a Behavioral Analyst in the field of Autism. Yet that does not even cover his volunteer work nor his Criminology and Psychology degrees from the University of Miami. Along with currently finishing up his MBA in Finance, from Governors State University, he’s also a contributor/writer for Seeking Alpha, an online financial and stock market publication. For the past fourteen years, he’s played competitive rugby. He’s sweet as can be and very humble and don’t even get me started on how he’s not too bad to look at as well. Though, we will go more into that in a second interview that will be published on May 7th – So check back for part 2 to learn more about Mr. Michael Scanlon.

As the month of April finishes up Michael and I wanted to spread awareness on Autism since April is Autism Awareness Month. We have both been touched by Autism in different ways. I had worked with a boy in a child care center years ago, named Aubrey who has forever left a mark on my heart. While Michael has experienced it first hand with his sister and also with working one on one at an Autism center as a Behavioral Analyst, making a difference one day, one life at a time. Here is our interview.

Would you share why Autism Awareness is important to you? Growing up with an older sister with autism, I became interested in it. It wasn’t until years later I would come to understand it and decided to study it as it was intriguing to me. When I started working with the kids I saw how cool the kids are and how big of a difference you could make. That is when it started to become really important to me, especially when I got to know the kids and form personal connections with them and their families. You see how difficult this makes their lives and witness the amount of divorces that result from this because it is so stressful on families. So, you want to do as much as you can to help. As a result, it becomes more personal the more you become invested. Autism involves developmental delays, though that does not necessarily mean that the kids aren’t going to develop or won’t have the chance to develop, it’s just a developmental delay. So, I witnessed how vital early intervention can be for these kids who were developmentally delayed. With intervention they could grow up and have a typical life and without it they could possibly end up in a group home, intellectually impaired.

How is your sister doing with her Autism? What is her progress?        My sister is higher functioning now. She works as a computer programmer and her skills are always improving.

Do you feel your schooling prepared you for working in the Autism field?  Yes, I majored Psychology geared towards intellectual and developmental delays with an emphasis on studying child development and what happens when things go wrong. I even took preconception health and prenatal development to have a better understanding of all the potential risks a child could develop before being born.

What did you implement while working at the Autism Center in Australia that changed the way the programs were structured moving forward?   We had switched to evidence-based practices/model rather than using an eclectic approach. There a was a collection of studies reviewed in 2015 by Dr. Wong and her colleagues and they looked at every study ever conducted. From that they compiled a list of what is evidence based, what seems to be emerging, and what does not have good evidence. We in turn took that list and used it as a guide as to what we would use. If it wasn’t evidence based, we weren’t going to use it as we wanted to stand behind what we were using. In 2015 myself, the senior team, and company psychologist all sat down and planned our curriculum, which was based mostly on the work by B.F. Skinner and Dr. Mark Sundberg. Dr. Sundberg is the leading researcher in verbal behavior.  So, we implemented everything that was evidence based and coincided with the verbal behavior model of applied behavioral analysis.

What do you want people to know about Autism and those that have it?    I think one of the biggest things is people seem to think that those with autism have a savant genius skill, which is not the case. A lot of them are intellectually impaired. Most of them early on are very developmentally delayed. It takes a lot of work early on to help them towards typical development but with early intervention most kids can be helped and even change their IQ. I used to give talks on the neuroscience of early intervention. The brain from 2-5 years of age is easily malleable. Even if you are not talking by 4 or 5 there is a good chance I can get you speaking. There is so much that can be done for these kids even if they are initially diagnosed as intellectually impaired. They are really cool kids and all very unique. Every kid is different, the main thing is they are good kids, they just need a little help and they can be helped.

What does changing their IQ entail?
How they perceive their environment will determine how they adapt. There are skills and social cues that they will need to learn how to imitate. For instance, in order for them to learn language they have to be able to imitate language. All these things come naturally to a typical developing child. One of the reasons all of this is so important is the reinforcement aspect comes into play. One of the most universal reinforcements I’ve ever come cross is M&M’s. I used to say that M&M’s can change a child’s IQ, because they can perceive something like an M&M as something very important to them. If that’s their favorite snack in the whole world than they will want to figure out how to obtain that. If every single time you teach them a skill, they get an M&M, that is teaching their neuropathways that this is something they will want in the future. To start, you’d want to begin with a physical prompting. For example, when I clap my hands they need to imitate by clapping theirs. You may need to show them by having someone sit behind them and clap their hands for them after they have watched you clap yours. This is hand to hand prompting and you will slowly fade it back showing them this is their response when you say do this and if they show you what you are asking, they will get an M&M. This will help their brain to start to develop those areas that are important for developing that skill because it leads to something that they somewhat perceive as important for survival. It is a weird way of breaking it down but that’s the way it works with early intervention. So, learn what is important to that child and assign them a task they need to learn tied to that reward to make up for the gaps in their learning. In terms of upping their IQ you need to get them into some sort of early intervention where someone can assess them on paper. You will be able to see all the skills that a typical developing child would have at this age and also know the skills that your child has as well as any gaps in development. Tasks will help you in filling in those gaps and reinforcements will help teach the importance of that skill to that child.

Explain the learning process that those with Autism go through or experience?    First you need to identify what their gaps are and once you find out their gaps, you can figure out the skills they do not have and use discrete trial training to try to teach them whatever that skill is over and over again until they have mastered it, using different mastering criteria. They will need to master at least three days of being at least 80% of these responses correctly in order to show that they have mastered that skill and they can move on to a higher order or skill. For some kids to get to the point of 80% that can take months. So really honing it down and doing 10-20 trials a day may be needed in order to help them if they keep confusing their responses because of not initially understanding the cue.  Some kids may master a skill in a week. Others may take a year. It’s just a matter of the way their brains are developing in terms of that specific skill. Some kids may not do well with imitation but may have great listening skills and understand a lot of commands. There are some kids who can understand a lot of commands but can’t speak. And kids who can speak full sentences but don’t understand when you say something to them. The different areas of the brain develop in different ways. The process is just repeated trials until they get it but usually reinforcement is helpful in getting the correct responses.

What have you found to be most effective in the advancement of autism?  The research to me is the most important thing. All money that goes into research is definitely needed. There’s so much research that goes into different aspects of it. Dr. Mark Sundberg’s work into verbal behavior is incredible. He has a good understanding of how all of that works and how B.F. Skinners work should be furthered. Also, there are researchers that are trying to figure out the causes of autism and what can happen. Even how to better understand it, finding ways to implement early intervention and earlier detection in analyzing kids before they even show signs. I think the mixture of both Sundberg and Skinner’s work aids in this research.

Would you ever consider starting a foundation for Autism?
There is so much more awareness in US but in Australia there was only nine Board Certified Behavioral Analysts (BCBA). There are other parts of the world that need more awareness and education on Autism.

Is your work with Autism your life’s legacy?
I always want to continue to help kids with autism as much as I can. Through the curriculum that the team implemented while I was there, I believe these kids are further ahead of where they would have been if changes had not been made. I’d like to emphasize the legacy I leave behind in Australia.

To learn more about the Autism Center Michael worked at, for resources,  or to donate please click on the link here: AEIOU – For Children with Autism. 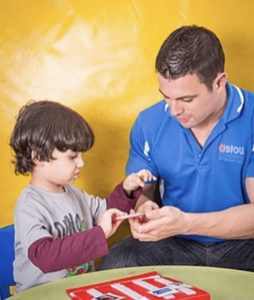